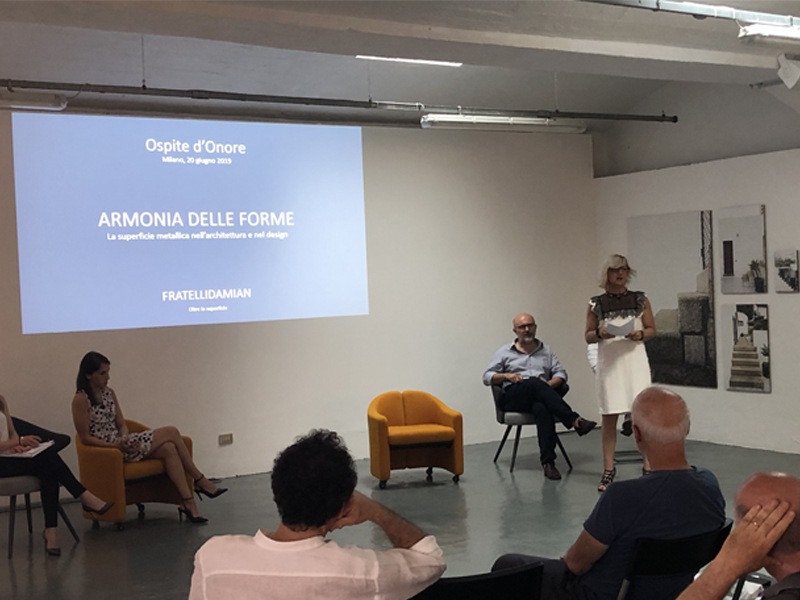 On 20 June 2019, at the CASABELLA Laboratory headquarters in Milan, FRATELLI DAMIAN was the protagonist, together with three other companies, of a meeting aimed at an audience of architects and designers. Here, it presented “Armonie delle Forme: la superficie metallica tra architettura e design” (Harmonies of the Forms: the metal surface between architecture and design), illustrating not only the company but also some of the works carried out in recent years.

The initiative is the last meeting of “OSPITE D’ONORE – Quando l’Architettura incontro l’Artigianato” (“GUEST OF HONOUR – When architecture meets craftsmanship”), a project that aims to put companies in contact with the world of architecture with the purpose of activating dialogues and new creative scenarios.

FRATELLI DAMIAN marked the occasion by exhibiting some elements of the METAL CHIC collection in the same space, already displayed at FUORISALONE 2019.

The project, conceived and implemented by FONDO PLASTICO, was promoted by Confartigianato AsoloMontebelluna, in collaboration with Confartigianato Marca Trevigiana and Casabella Formazione, and was co-financed by EBAV.

CASABELLA Laboratory is a space for events and meetings run by CASABELLA, a well-known architecture and design magazine.

This website uses cookies to improve your experience while you navigate through the website. Out of these, the cookies that are categorized as necessary are stored on your browser as they are essential for the working of basic functionalities of the website. We also use third-party cookies that help us analyze and understand how you use this website. These cookies will be stored in your browser only with your consent. You also have the option to opt-out of these cookies. But opting out of some of these cookies may affect your browsing experience.
Necessary Always Enabled
Necessary cookies are absolutely essential for the website to function properly. This category only includes cookies that ensures basic functionalities and security features of the website. These cookies do not store any personal information.
Non-necessary
Any cookies that may not be particularly necessary for the website to function and is used specifically to collect user personal data via analytics, ads, other embedded contents are termed as non-necessary cookies. It is mandatory to procure user consent prior to running these cookies on your website.
SAVE & ACCEPT